The construction of a new parcel terminal for DPD Lietuva, one of Lithuania’s leading parcel delivery companies, has been officially launched in the Šiauliai Free Economic Zone (ŠLEZ) in northern Lithuania, with an estimated investment of around EUR 2.5 million. The project is planned to include a warehouse building of almost 2,400 square metres, which can be expanded in the future according to the company’s needs, on a plot of 1.6 hectares.

A special capsule for future generations was buried at the construction site of the DPD Lietuva parcel distribution centre. According to Artūras Klangauskas, Head of Šiauliai LEZ, this is the first capsule in the history of this economic zone.

“We are delighted to be embarking on another phase of development, which means that one of the leaders in its field, parcel delivery company DPD Lietuva, will be located in Šiauliai. The symbolic burial of a capsule for future generations is also important for us. Two years of an intense coronavirus pandemic not only raised doubts about the future and business plans, but also forced us to choose other forms of communication. The fact that we can come together in a lively way and again cherish traditions strengthens the feeling that life is getting back to normal,” says A. Klangauskas.

According to him, the arrival of DPD Lietuva to Šiauliai FEZ will expand the attractiveness of the zone, which has so far attracted exclusively manufacturing companies, for logistics market players.

The project for the construction of a built-to-suit warehouse and parcel centre for DPD Lithuania will be implemented by Baltic Sea Properties (BSP), a Norwegian real estate development company working with logistics and distribution companies such as Oribalt, Vingės Terminal, Delamode and Rhenus Logistics.
It is planned that DPD Lietuva will lease the parcel distribution centre in Šiauliai LEZ for 15 years. The building should be completed in October this year and economic activity will start there by the end of the year.

“Robertas Vilkaitis, Managing Director of DPD Lietuva, points out that the expansion and installation of the new parcel distribution terminal in northern Lithuania has been on the table for a long time, but the rapidly growing parcel flows and the continuing growth of e-commerce have accelerated these plans.
“The pandemic-driven online commerce continues to give our couriers no respite. This means that we are continuously investing in our internal infrastructure to maintain the high quality of parcel delivery. The new parcel terminal in Šiauliai will allow us to distribute parcels more efficiently and deliver them to customers even faster. The significantly larger area of the parcel distribution centre and the significantly increased number of loading zones will ensure that couriers will leave earlier with loaded parcels and reach their destination faster,” – Robertas Vilkaitis, Managing Director of DPD Lietuva.

DPD Lietuva currently has 13 parcel distribution centres in the country. The company employs more than 1 100 people, including more than 630 couriers.

In Šiauliai, DPD now has a parcel terminal with an area of 1,7 thousand square metres. 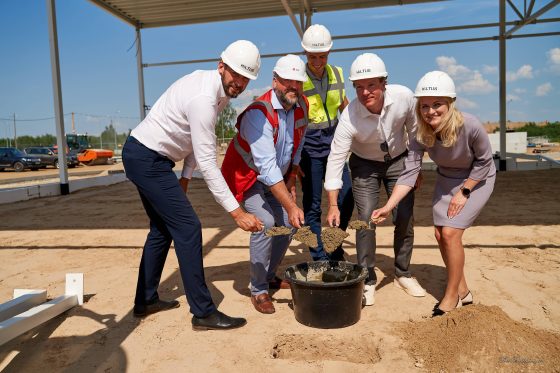 About Šiauliai LEZ:
Šiauliai Free Economic Zone UAB is managed by Investment Partner, a company owned by Progressive Business Solutions and Eika. 9 hectares of the 130 hectares are leased to the Šiauliai LEZ, which is home to companies such as Bär Cargolift, Vilmers, Plus Windows, RD Signs and Medicinos linija.