The economy and business: the region’s problems and opportunities, 2019

On 6 September, the eighth academic-practical conference took place at Šiauliai University, to mark the 783rd anniversary of the city of Šiauliai. The theme of the conference was “The economy and business: the region’s problems and opportunities, 2019”. Representatives of state institutions and members of the academic and business communities participated in the event. The main accents of the conference were an analysis of the current situation in the Šiauliai region and opportunities in the near future for innovation and knowledge-based growth in the business sector.

Artūras Klangauskas, CEO of the Šiauliai FEZ, delivered the presentation, “Šiauliai, a centre of the engineering industry: the current situation of the ŠiauliaiFree Economic Zone, its prospects and benefit to the region”. He thoroughly described the competitive advantages of the free economic zone, shared its ambitious plans and identified the real benefit of the FEZ to the region. Because students in engineering and technical specialitiesare educated in the city of Šiauliai, they can be successfully put to work in the near future in the Šiauliai FEZ.

The academic-practical conference was organisedby the Association of Economists of the ŠiauliaiRegion, the Šiauliai City Municipality and Šiauliai University. Participants were welcomed to the conference by Dr Solveiga Skunčikienė of the Association of Economists of the ŠiauliaiRegion, Professor Dr Darius Šiaučiūnas (Acting Rector of ŠiauliaiUniversity) and Antanas Bartulis(Director of the Administration of the ŠiauliaiCity Municipality). The presenters focused their presentations on innovation, the concept of the smart city and realistic prospects for implementing the concept. Much attention was paid to Šiauliai International Airport as a strategic variable in seeking to develop the Šiauliairegion as an important centre for the engineering industry. Šiauliai International Airport is especially important to the ŠiauliaiFree Economic Zone in creating significant added value by attracting new investors, including Lithuanian as well as foreign companies. 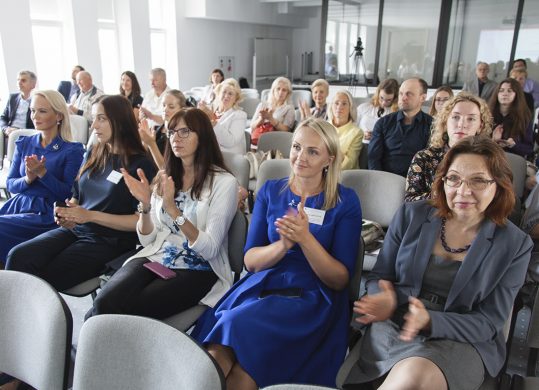 Aurimas Žvinys, head of the Šiauliai State Drama Theatre as well as member of the city council of the Šiauliai City Municipality, took a non-traditional look at the concept of sales and shared his insights in his presentation, “How to sell what is not for sale”.

The organisation of academic-practical conferences is useful to the academic as well as the municipal and business communities. With cooperation among academic, municipal and business representatives, the most important goals for shaping the region and potential ways of reaching such goals can be identified. The result of this cooperation is the development of the region’s economy and new jobs for promising employees with specialised technical and industrial skills.s.