A world-leading bicycle company Pon.Bike has announced plans to open a new manufacturing facility in Kėdainiai, Lithuania in 2024. According to Pon.Bike the new production center could scale up to an annual production capacity of 600,000 bikes and will be equipped to produce bikes for multiple brands across the company’s portfolio.

The new Pon.Bike facility will be located in the Kedainiai Free Economic Zone which is 50 km from Kaunas airport, 145 km from Vilnius airport, and 220 km from the seaport in Klaipeda. The Lithuania facility is the third new factory the company will have opened within a few years’ time. Pon.Bike is investing in more production capacity in Europe to cater to a growing demand while keeping logistics simple and efficient.

Pon.Bike said it expects to hire around 300 people over the first three years of operations, potentially growing to over 500 in the future.

“We know that the investor has carefully assessed several possible locations and we are happy with his decision to establish in Kėdainiai. I have no doubt that Pon.Bike appreciated the attractive logistics conditions, the infrastructure offered for the new plant, the production base, the supply chains and the supply of human capital. Having received such an investor, for which many Central and Eastern European countries competed, we feel even more motivated to intensify the attraction of investors to the Kėdainiai FEZ, strengthening the awareness and advantages of this location abroad”, said Valuckas.

With 2,400 employees worldwide, Pon.Bike has recently become a global leader in bicycle manufacturing through the acquisition of Dorel Sports, a global leader in the international brand Cannondale. Such a purchase will allow the company to reach 2.5 billion. Eur turnover. 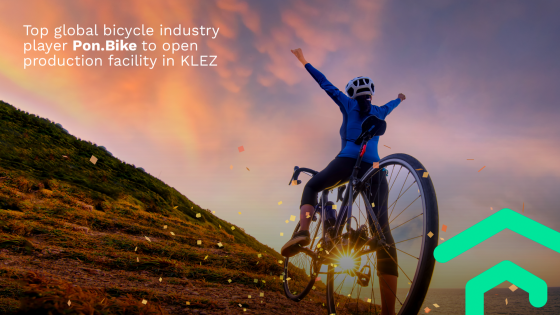 Go back
Construction of the new DPD parcel terminal in
Businesses struggling to find workers starts
Lithuania as EU’s springboard for investment
DPD is expanding in Šiauliai FEZ: construction will