Bär Cargolift, one of Europe’s largest manufacturers of automotive tail lifts, has opened a factory in the Šiauliai FEZ. It is the first production branch of the German company in a foreign country, where it is planned to employ up to 100 people in the coming years. Annual turnover is expected to reach €7 million by the end of 2022 and up to €20 million by 2025.

“We have many offices in Europe and abroad but having a branch in another country is a new experience for us. We decided to expand by opening a new factory to meet the strong growth in demand for automotive tail lifts. We looked at Poland, Bulgaria, and Romania, and chose Lithuania because of its convenient geographical location, the positive attitude of the authorities and the fact that many people here speak English”, says Tobias Bär, owner of Bär Cargolift.

Bär Cargolift is the second largest manufacturer of tail lifts in Europe. It produces more than 15,000 freight elevators a year. The company’s main market is Europe, with plans to expand into North America, South Africa and Australia. The company’s main partners are Mercedes Benz, Volkswagen, Iveco, Scania, Schmitz Cargobull, and its European customers include McDonald’s, Coca Cola, Lidl, Aldi, Intermarche and others.

The investment in the Šiauliai FEZ amounted to €10 million

“The Bär Cargolift plant is one of the larger investments both in the Šiauliai LEZ and in the whole region as well. The company is renowned for its engineering expertise in the automotive industry, which will draw the attention of other global players to our region. We believe that Bär Cargolift’s decision to invest in our region will encourage other foreign companies to do the same,” says Giedrius Valuckas, Chairman of the Board of the Šiauliai LEZ.

According to Rimantas Damanskis, a representative of Bär Cargolift’s factory in Lithuania, the factory is expected to produce 25,000 sets of components for freight elevators per year. In the future, it is planned to expand the production technology and to start supplying sheet steel and robotically welded metal components to external customers from 2022.

The 9,500 sqm building, spread over 3.5 hectares, is energy class A++ and equipped with modern heating systems that use minimal energy. For production activities, electricity will be purchased exclusively from renewable energy sources, with part of the energy required coming from a rooftop solar power plant. Working conditions are given high priority, with natural daylight and unobtrusive lighting in the premises, and automatic ventilation. 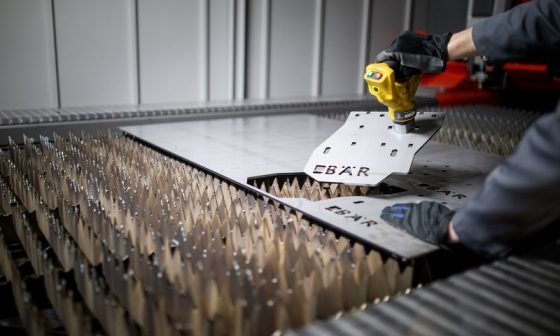 According to R.Damanskis, the biggest challenge of the construction was the fact that it took place during quarantine. “The design, coordination of conditions, approvals, construction supervision and other decisions were taken only remotely. However, there were no disruptions, no illnesses on site and no supply chain disruptions,” says the factory representative.

The plant currently employs around 40 people, with plans to increase the number to 100. Most of the employees are metalworkers and plant operators. Future plans include expanding the design department for external projects and setting up an IT centre.

Part of the infrastructure of the Šiauliai LEZ was completed in 2018 and during this time 4 factories have been established here. The Šiauliai FEZ covers 133 hectares, of which 19 hectares are leased or reserved. The Šiauliai Free Economic Zone is managed by two market leaders, Progressive Business Solutions and Eika.