2020 was full of interesting challenges (to put it mildly) for the companies operating in the Kėdainiai FEZ. Last year, two foreign-capital companies, Kormotech and Linde Gas, began operations here. Kormotech produces wet food for cats and dogs, and has set itself the goal of becoming one of the top 50 companies in its industry. Linde Gas officially began operations here at the very end of 2020 and will supply industrial gases as well as liquid oxygen and nitrogen products to the market. New markets have opened up to the IKAR company, a manufacturer of liquid fertilizer, while UAB Natūralus pluoštas expects to see growth in demand for its production, hemp fiber for high-quality textiles, as soon as the global public health situation stabilises.

2020 was quite successful for liquid fertilizer manufacturer IKAR, and new opportunities opened up. At present, its production facility is operating at full capacity. Growth in turnover of 30-40% is expected in 2021, because the company has already received a significant portion of its planned annual orders. The company’s head of marketing, Nikolajus Gurskis, also says that the company has recently received three ISO certificates, proving that the company’s processes meet the highest international standards.

The CEO of UAB Natūralus pluoštas, Raimondas Petreikis, is pleased to report that the company managed the dramatically-changed pandemic situation and was able to avoid the need for state subsidies, and, putting all its resources to work, to continue its production processes. Sales of hemp fiber for textiles fell dramatically in Lithuania, as indeed they did around the world as well. As Petreikis says, bringing a new product to market, hemp fiber for textiles, in the middle of a global pandemic is quite a challenge, taking into consideration the fact that the factory began to operate relatively recently. Although UAB Natūralus pluoštas came through 2020 without any significant growth in turnover, CEO Petreikis remains an optimist and is looking forward to a successful year, just as soon as the pandemic is brought under control.

Linde Gas officially began operating at the Kėdainiai FEZ at the very end of 2020. The factory will supply oxygen and nitrogen products to the Baltic market. These industrial gases are used in the food and chemical industries, metal processing, glass and paper production, water treatment and other fields. The factory operated on a trial basis starting in early December 2020 and, having received the necessary permits and approvals, has begun to operate as planned.

The new air separation plant is designed to have minimal impact on the environment and to make economical use of resources. Production processes use green electricity generated from renewable energy sources. The plant has the highest level of automation and compliance with the latest safety standards. Linde Gas will shorten delivery time and distance to the customer and contribute to a sustainable environment. 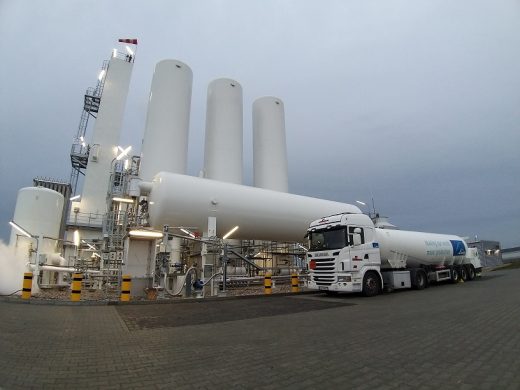 During the pandemic, the Ukrainian manufacturer of wet food for dogs and cats, Kormotech, expanded its export geography to 37 countries. 2020 presented a serious challenge to various companies around the world, but Kormotech stubbornly carried out its expansion plans and grew despite the difficult environment.

Kormotech’s main achievement during the year was opening its factory in Lithuania. Covid-19 did not stop the company from building a modern automated factory in less than a year. In July 2020, due to the various restrictions on ordinary work and travel, the new production line was officially opened with an online ceremony. Its production capacity in Lithuania will allow the company to produce 20,000 tons of wet food for pets each year. Kormotech intends to become one of the world’s top 50 leading producers of cat and dog food by 2023.

“To achieve the target that Kormotech has set for itself, we have to increase our production volume each year by an average of 20,000 tons, so our factory in Lithuania is not the end of our expansion. In 2020, we invested 6 million euro into a new production line at our dry-food factory in Ukraine…,” says Kormotech’s CEO, Rostyslav Vovk.